Unit 6, grade 9: Vietnam Then And Now – Looking Back

Complete the following word web with transport systems in Vietnam then and now. (Completed the network from then on with the transportation system in Vietnam past and present.)

Fill in each blank with one word/phrase. (Fill in the blanks with words/phrases)

1. She lives in a family of many generations, so she doesn’t have much privacy.

2. We live in a small family with only my parents and me.

3. Our children did not have good learning facilities such as computers, CD players or laboratories in the 1980s.

4. Rubber sandals have been an image associated with our soldiers in the past.

5. Classrooms made from mud and straw with trenches around were commonly used in Vietnam during the war.

I went to a school for the gifted in Ho Chi Minh City. My house is far away, so I have to live with my relative. It was a multi-generational family with ten people and a cousin the same age as me. My mother was worried because I came from a small family – much smaller and less complicated. I am a very disobedient girl who never does what others tell her to do. I’m even jealous when my cousin gets better grades. Fortunately, my relatives were really sympathetic and understanding, and my cousin is a tolerant girl. She wasn’t too upset by my bad behavior. Just like her mother, she was willing to help me with my studies and take care of me when I was sick. After three years with them, I also learned that in order to be with members of a large family, I should learn to share.

first. It is necessary/important to value the improved living conditions we have today.

2. She was certain/sure/hopeful the skytrain system would solve the traffic problems in the city.

(She certainly/certainly/hopes that the sky train system will solve the traffic problem in the city.)

3. The government is certain/sure/confident that our education system will be improved significantly by the year 2020.

(The government is sure / certain / confident that our education system will be significantly improved by 2020.)

4. We are all sorry/sure that pollution is getting more and more serious.

(We all regret / guarantee that the pollution is getting worse and worse.)

5. We were sorry to have heard about the poor living conditions back then.

(We were sorry to hear about the poor living conditions that day.)

6. I am convinced/certain/sure that the clanging sounds of the trams in Ha Noi will stay in our hearts forever.

(I’m sure/surely/surely that the sirens of the trams in Hanoi will forever be in our hearts.)

Correct the italized text where necessary. (Edit the italicized part if necessary) 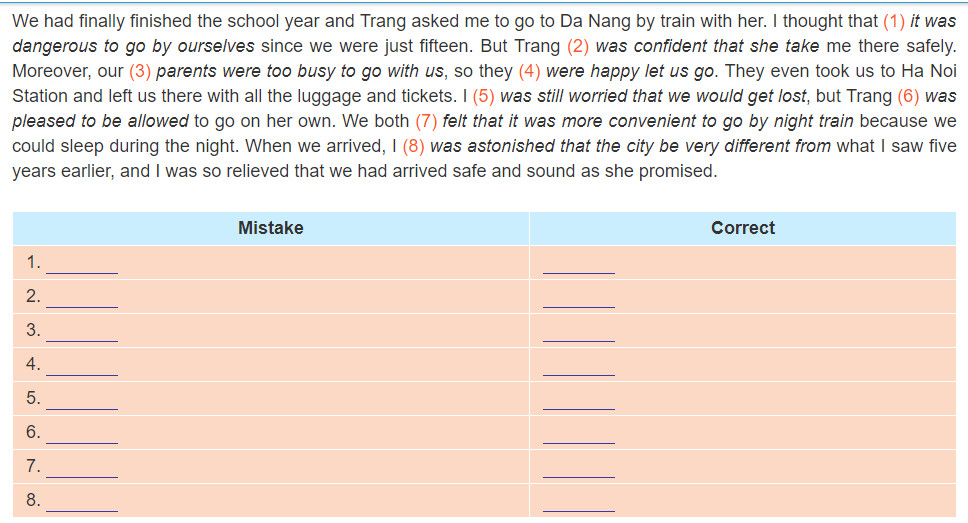 We finally ended the school year and Trang asked me to go to Da Nang by train with her. I thought it was dangerous for us to go like that when we were fifteen years old. But Trang trusted that she could get me there safely. Furthermore, our parents were too busy to go with us, so they were happy to let us go. They even took us to Hanoi station and let us go with all the luggages and tickets. I was still worried that we would get lost, but Trang was excited to go on her own. We both felt that it would be more convenient to travel by train at night because we could sleep at night. When we arrived, I was amazed that the city was different from what I had seen five years ago, and I was relieved when we arrived safely as she promised. 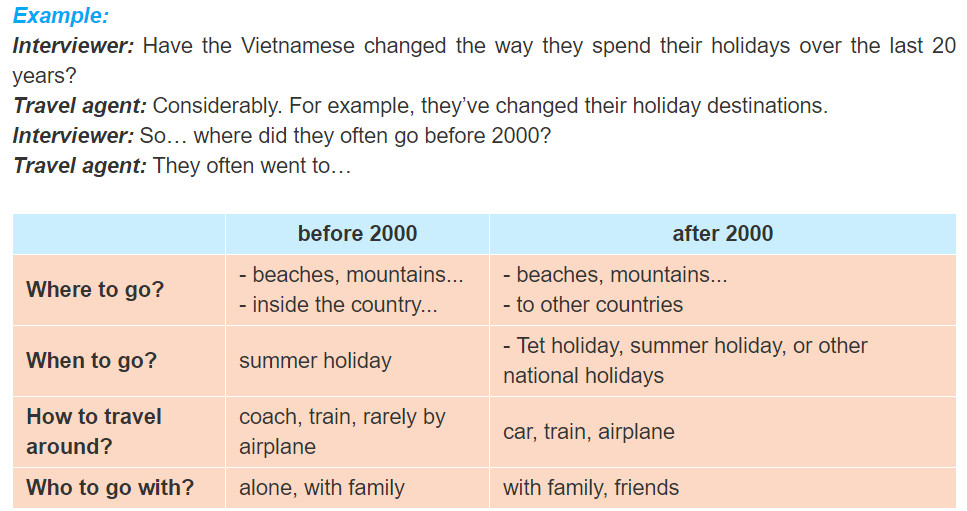 Interviewer: Have the Vietnamese changed how they spend their vacation in the past 20 years?

Interviewer: So where did they usually go before 2000? 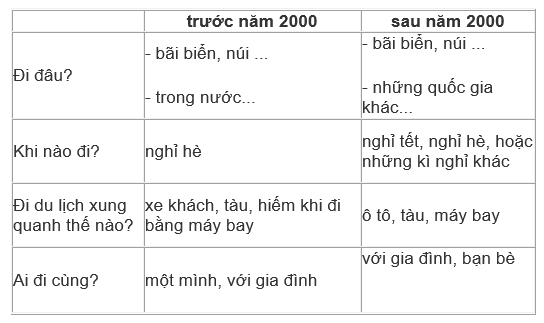 Interviewer: Have the Vietnamese changed the way they spend their holidays over the last 20 years?

Interviewer: So… where did they often go before 2000?

Travel agent: They often went to beaches, mountains, places inside the country.

Interviewer: How about after 2000?

Travel agent: Oh, beaches and mountains are still popular choices. But they also travel to other countries.

Interviewer: How did they often travel before and after 2000?

Travel agent: Before 2000, they often went by coach or train. After 2000, other means of transportation like cars or planes became more popular.

Interviewer: Thank you for sharing!

Reporter: Have Vietnamese people changed the way they spend their holidays in the past 20 years?

Travel agent: Remarkable. For example, they changed their vacation destination.

Reporter: So where did they usually go before 2000?

Travel agent: They often go to beaches, mountains, places in the country.

Travel agent: Oh, beaches and mountains are still popular choices. But they also travel to other countries.

Reporter: How often did they travel before and after 2000?

Travel agent: Before 2000, they usually traveled by bus or train. After 2000, other means of transportation such as cars or planes became more common.

Reporter: Thank you for sharing!

Choose the word or phrase among A, B, C or D that best fits the blank space in the following passage.

During the war, children wore straw hats to (1) …….. themselves from debris. Houses and schools were bombed and destroyed. Many children were made (2)….. and their schools had to be moved around or lessons sometimes had to (3)……. after dark to avoid being targeted by heavy bombing. Many schools had its roof (4)…….. with several layers of straw to withstand the (5)………… of the bombs. Life for children was very hard in both the North and South of Viet Namduring the war.

Young people were (6)…….. of their duty to serve their country. Even young girls took part in the war efforts by digging bomb shelters. Children took first-aid courses after school so that they could (7)…………. injured people.

Childhood years of children born in the 1960s are (8)…….. As innocent children, they went to school (9)……… straw hats in the sounds of American jet fighters in the sky and the shots from Vietnamese anti-aircraft guns.

Nowadays, they are proud that they came through those hardships. They had their heads held (10)………… walking out of the war.

Circle the correct answer A, B, C or D.

Question 2: You like history, so Vietnam National Museum of History is a _____ place.

+ Adjective + that-clause (Adjectives with that clause)