Past perfect (Past Perfect Tense)

first. Before the 1990s, trams (be) had been a popular means of transport In Ha Noi.

(Before the 1990s, trams became popular in Hanoi.)

2. I won the game because I (play) had played It a lot with my brother.

(I won the game because I played it so many times with my brother.)

3. How long (use) had you used your mobile phone before it broke down?

(How long did you use your cell phone before it broke?)

4. Before the invention of television, people only (see) had only seen films at the cinema.

(Before the invention of television, people only watched movies at the cinema.)

(Before the 90s, Vietnam had an old banking system.)

6. Vietnam (experience) had experienced decades of fighting for freedom before the country became totally independent.

(Vietnam spent decades fighting for freedom before the country was completely independent.)

– How long had King Duc Duc ruled our country before he was overthrown?

– He had ruled the country for only three days.

first. – What family groups had Vietnamese people lived in before 1990?

– They had lived in extended families.

2. – How had people in Vietnam travelled before the first motorbike was imported?

– They had traveled by bicycle.

3. – How had Vietnamese people lived before the open-door policy in 1986?

– They had a harder life.

– We had spent our holidays only in Vietnam before then.

5. – Who had ruled Viet Nam right before the Tran dynasty?

– Ly Chieu Hoang had ruled the country before the Tran dynasty.

1. – What is the group of Vietnamese families living together before 1990?

– They lived in large families.

2. – Do people in Vietnam go before importing the first motorbike?

– They go by bicycle.

3. – How did Vietnamese people live before the open door policy in 1986?

– They had a harder life.

4. – Where did your family spend their vacation before 2005?

– Before that we spent the holidays in Vietnam.

5. – Who ruled Vietnam right before the Tran Dynasty?

– Ly Chieu Hoang ruled the country before the Tran dynasty.

first. It was smart of her – to be able to solve the maths problem.

2. It was brave of him – to stay in the old house alone the whole night.

(It was his bravery – to stay in the old house alone all night.)

(It was her kindness – to lend me her book.)

4. It was unprofessional of her – to be late for the meeting.

(That’s her unprofessionalism – being late to meetings.)

5. It is useful for us – to know about how our people used to live in the past.

(It was very helpful to us – knowing how our people lived in the past.)

6. It is hard for us – to get along with people from other cultures.

(It’s hard for us – traveling with people from other cultures.) 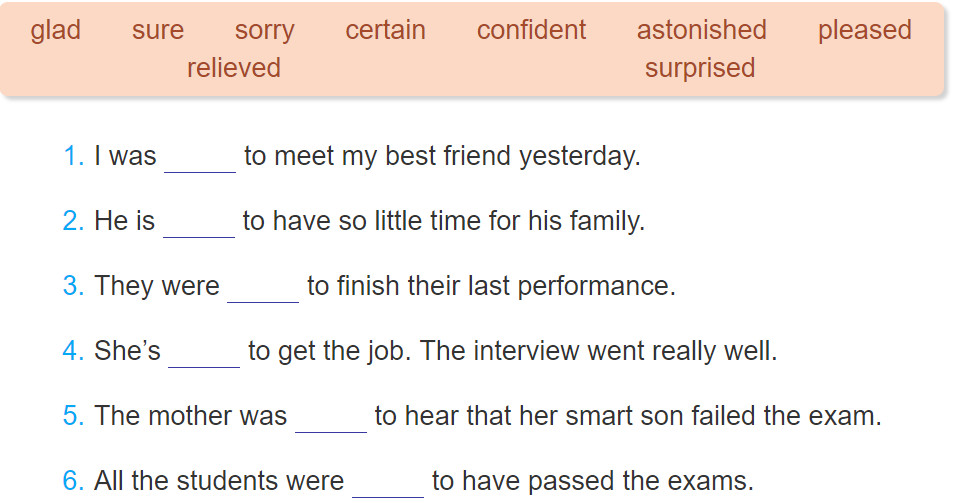 1. I was happy to meet my best friend yesterday.

2. He regrets that he has little time to spend with his family.

3. They were satisfied when they finished their last performance.

4. She is definitely getting the job. Very good interview.

5. The mother was surprised to hear that her smart son failed the exam.

6. All students were very satisfied with passing the exam.

first. We did well in the exam. We were relieved about that.

2. I am sorry about the school facilities our parents had. They were very poor.

3. Everyone was glad. The government had decided to invest more in education.

4. It will be much safer to have elevated walkways and underpass systems for pedestrians.

5. Life in the countryside has improved considerably. All of us are delighted about that.

1. We were relieved that we had done well in the exam.

2. I am sorry that our parents had very poor school facilities.

3. Everyone was glad that the government had decided to invest more in education.

4. Everyone is aware that it will be much safer to have elevated walkways and underpass systems for pedestrians

5. All of us are delighted that life in the countryside has improved considerably.

1. We feel relieved when we did well in the exam.

2. I’m sorry that our parents studied in very poor facilities.

3. Everyone is happy that the government has decided to invest more in education.

4. Everyone knows that it is much safer to have a system of tunnels and high tunnels for pedestrians.

5. All races know that life in the countryside has changed dramatically.

first. It was kind of them to help the poor.

(It is their kindness to help the poor.)

2. They were certain to be able to build the country into a powerful one.

(They can certainly build the country into a great power.)

3. She is confident that Vietnam has good potential for tourism.

(She believes that Vietnam has good tourism potential.)

4. He was afraid that there would be less land for agriculture in Vietnam.

(He is afraid that there will be less and less farmland in Vietnam.)

5. The teachers are aware that they have to help the weak students.

6. The head teacher was amazed to learn that some of his students could not get scholarships.

(The homeroom teacher was astounded to learn that some of his students could not get scholarships.)

Circle the correct answer A, B, C or EASY

Question 1: It _____ that the first temple was built on the current site of Thien Tru in the 15th century during the reign of Le Thanh Tong.

A. thinks B. is thinking C. is thought D. thought

Question 2: The fashionable store is an attraction in the city __ the product quality is nice.

Find the word which has a different sound in the part underlined.

+ Adjective + that-clause (Adjectives with that clause)