Paul: Hi, Duong! How’s it going? Getting over the jet lag?

Duong: Yes, I slept pretty well last night. Hey, thanks so much for showing me around today.

Duong: So, are you from around here?

Paul: Me? Yes, I was born and grew up here. Sydney’s my hometown.

Duong: It’s fabulous. Is it an ancient city?

Paul: No, it’s not very old, but it’s Australia’s biggest city, and the history of our country began here.

Duong: Wow! So what are the greatest attractions in Sydney?

Paul: Well, its natural features include Sydney Harbor, the Royal National Park, and Bondi Beach. Man-made attractions such as the Royal Botanic Gardens, Sydney Opera House, and the Harbor Bridge are also well known to visitors.

Duong: What about transport?

Paul: Public transport here is convenient and reliable: you can go by bus, by train, or light rail. Taxis are more expensive, of course.

Duong: And is Sydney good for shopping?

Paul: Of course! You know, Sydney’s a metropolitan and multicultural city, so we have a great variety of things and foods from different countries. I’ll take you to Paddington Market later, if you like.

Duong: Wonderful. What about education? Are there many universities?

Paul: Sydney has five big universities and some smaller ones. The oldest of them was set up in 1850.1 believe.

Paul: Hello Duong! How’s it going? Are you tired after the flight?

Positive: I slept pretty well last night. Ah, thank you so much for showing me around today.

Positive: Do you live around this area?

Paul: Me? Yes, I was born and raised here – Sydney is my hometown.

Positive: Amazing. Is it an old city?

Paul: No, it’s not very old, but it’s the largest city in Australia and our country’s history begins in this city.

Positive: Wow! So what are the best attractions in Syney?

Positive: What about traffic?

Paul: Public transport here is convenient and reliable. You can take the bus, train or train. Taxis here are of course quite expensive.

Positive: Is shopping in Sydney good?

Paul: Oh of course. You know Sydney is an urban and multicultural city, so there’s a lot of food and food from other countries. If you like, I’ll take you to Paddington Market shortly.

Positive: Great! What about education? Are there many universities?

Paul: Sydney has 5 major universities and a few small ones. The oldest school was founded in 1850, that’s what I remember.

Positive: Oh, that sounds like a good place for a college education. I like this place so much.

2. In Paul’s opinion, Sydney is not an old city.

3. Sydney Harbor is a natural attraction of Sydney.

4. Shopping is great because there is a wide variety.

5. Duong thinks Sydney could be a good place to study.

2. a place of attraction – characteristic

4. belonging to the big city – the central capital

first. He grew up in Sydney.

2. Sydney is the biggest city.

3. It is convenient and reliable.

4. Because it is a metropolitan and multicultural city.

first. Where did Paul grow up?

He grew up in Sydney.

2. What is Australia’s largest city?

Sydney is the largest city.

3. How is public transport in Sydney?

4. Why is there so much variety and delicious food in Sydney?

Because it’s a multicultural city.

5. When was the first university in Sydney built?

first. How’s it going?/ How are you these days?

2. Did you feel better after the flight?

1. There is not much international/world news in this newspaper.

2. I shop at the neighborhood/local store, not in the town center.

3. On weekends, the city center is always full / crowded with people.

4. My friend’s family has moved to a nearby town/neighborhood. 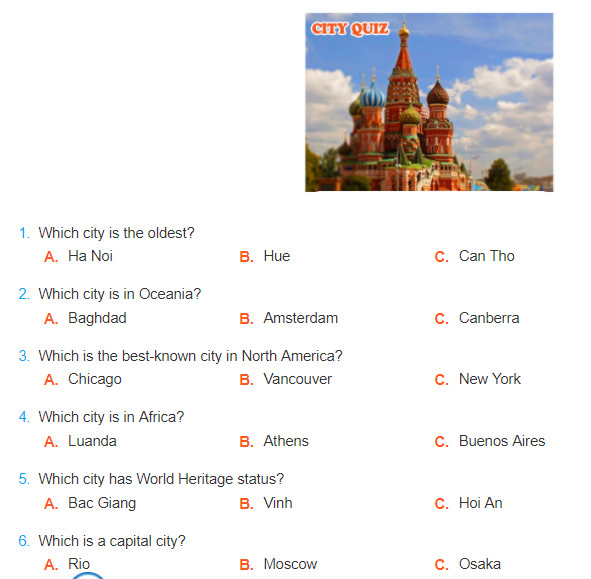 first. Which city is the oldest?

2. Which city in Oceania?

3. What is the most famous city in North America?

4. Which city in Africa?

5. Which city is a World Heritage Site?

6. What is the name of the capital?

Complete the sentences using the given words.

Question 1: Tourists can see a wide ………… of hand-made things at the event.

Question 2: He was hired for the position because he is …………

A. reliability B. reliable C. reliable

Question 3: The research on tourism was ………… by scientists at the most famous national university.

A. conduction B. conductive C. practiced

Question 4: New Zealand is one of the countries of …….

A. Oceania B. Asian C. Asian and Pacific

Question 5: Economic …………. this year is better than those of last year.

Find the word which has a different sound in the part underlined.

At the end of the lesson, students need to do full exercises, practice answering questions and remember the vocabulary in the lesson: