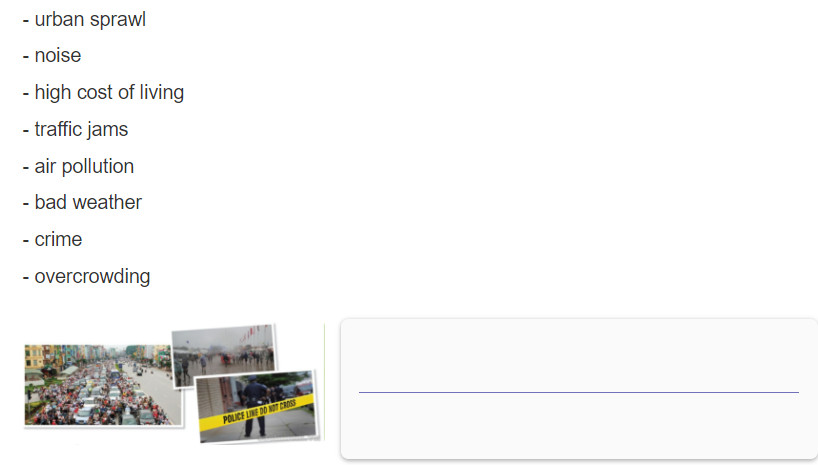 first. “Many cities have problems with pollution, crime and bad weather – here we have traffic jams.”

2. Before going to work, she has to take her children to school.

3. In the evening traffic is very bad.

4. Now there are too many people with cars, and not enough roads in the city. 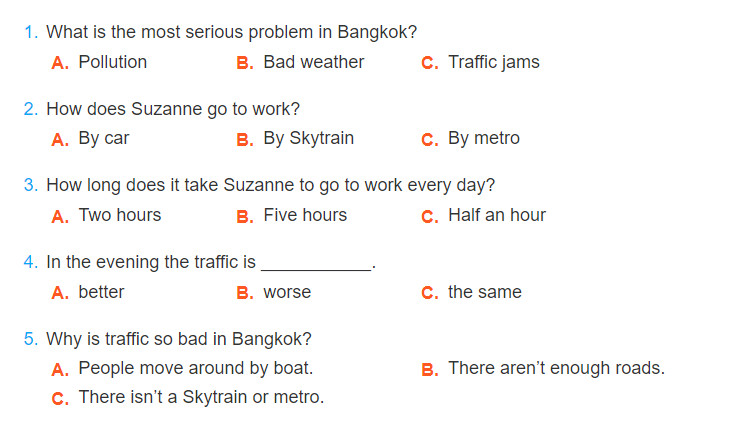 first. What is the most worrying issue in Bangkok?

2. How does Suzanne get to work?

3. How long does it take Suzanne to go to work every day?

4. Traffic at night is very bad.

5. Why is traffic so bad in Bangkok?

There is not enough sugar.

Suzanne lives in Bangkok with her husband and two children. Her office is seven km away but it takes her two hours to get there by car every day.

“Some cities have problems with pollution, crime, or bad weather – here we have traffic jams,” she says. Before going to the office, she has to take her children to school – so she sets off at 5 am The children sleep until they arrive at school. Then Suzanne begins her journey to the office

In the evening the traffic is even worse. Traffic moves in the city center at half a kilometer an hour. In rainy weather it doesn’t move at all.

But why is it so bad? In the past, more people moved around Bangkok by boat. Now so many people have a car, and there aren’t enough roads in the city. The Skytrain and metro can help a bit, but they are limited in range and don’t cover all parts of the city.

Suzanne lives in Bangkok with her husband and two children. Her office is 7km away but it takes her 2 hours by car every day.

“Many cities have problems with pollution, crime, or bad weather – here we have traffic congestion,” she said. Before she goes to the office, she has to take her kids to school – so she leaves home at 5am. The kids slept until they got to school. Then Suzanne started her schedule to the office.

In the evening, the traffic is very bad. Moving traffic in the city center half a kilometer is an hour. When it rains, you can’t move at all.

But why is it so bad? In the past, many people in Bangkok traveled by boat. Now many people have cars, and there are not enough roads in the city. Skytrains and subways can help a bit, but they are limited in scope and don’t cover all areas of the city. 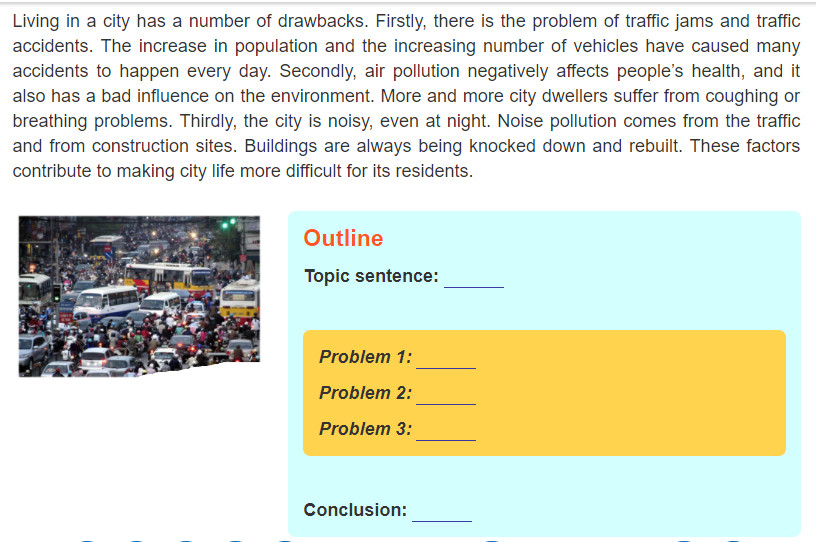 – Topic sentence: Living in a city has a number of drawbacks.

“There is the problem of traffic jams and traffic accidents.”

“Air pollution negatively affects people’s health, and it also has a bad influence on the environment.”

“The city is noisy.”

– Conclusion: These factors contribute to making city life more difficult for its residents.

Living in the city has some downsides. Firstly, there is the problem of traffic congestion and traffic accidents. The increase in population and the increasing number of vehicles has caused many accidents to happen every day. Second, air pollution negatively affects human health, and it also has an adverse effect on the environment. More and more people in the city are suffering from respiratory problems. Third, the city is noisy, even at night. Noise pollution from traffic and from construction sites. The building is always demolished and rebuilt. These factors contribute to making life more difficult for city dwellers.

– Topic sentence: Living in the city has some disadvantages

– In conclusion /To conclude

There are a lot of problems in big cities. Air pollution is one of the most serious problems. First, air pollution comes from the factories in the city. Big cities attract a lot of both inside and outside investments, so the number of factories is increasing quickly. This makes the air extremely tarnished by smoke from factories. Second, that there are too many transportation means also makes this problem worse. Exhaust from cars, motorbike is one of the factors that make the air tarnished. To conclude, air pollution, which contributes to making more and more people get many serious diseases, such as lung cancer, tuberculosis and so on, is a big of city life.

There are many problems in big cities. Air pollution is one of the most serious problems in big cities. First, air pollution originates from factories in the city. Large cities attract a lot of investment both inside and outside the city, thus causing the number of factories to increase rapidly. This makes the air seriously polluted by smoke from factories. Second, having too many means of transport also makes this problem more serious. Exhaust gas from cars and motorbikes is one of the important factors causing air pollution. In summary, air pollution, which is contributing to many important diseases for humans, such as lung cancer, tuberculosis and …, is a major limitation of urban life.

Choose the best option to complete the sentences.

A. the angry B. the most angry

C. The more and more hot/ the more D. The hottest/ the most

Question 4: Of course you can come to the party……….

Choose the word which has a different stress pattern from the others.

At the end of the lesson, students need to do full exercises, practice listening, practice writing about issues where they live and memorize the following vocabulary: