2. Most services today are according to the tastes of the community, not for an individual audience.

3. This course is quite theoretical, I want something more practical.

4. Successful education must meet the needs of society.

6. Teachers will become facilitators instead of informers.

first. Greener is an organization which supports community activities.

(Greener is an organization that supports community activism.)

2. Ore dream is to become the largest childcare provider in the area.

(Our dream is to be the largest child care provider in the region.)

3. I hope that in the near future, scientists will find a reliable method of predicting earthquakes.

(I hope that in the near future scientists will find a reliable way to predict earthquakes.)

4. We have tailored our syllabus to fit this advanced group.

(We have modified the syllabus to accommodate the advanced group.)

5. Every school has to evaluate how well their students are doing.

(Each school must assess how well students are performing.)

6. They called three witnesses of the accident to court.

(They called three witnesses of the accident to the court.)

1. A group of biologists who come from different countries are studying penguins in Antarctica.

2. The young man sitting near the bar is a famous scout Peter Wing, whom we are talking about.

3. On the wall are old, black and white photographs.

4. Have you ever met Picasso’s La Guerre, which is truly a masterpiece.

5. This lovely place is Nowy Swiat, which means new world.

6. Police are looking for two young men who were seen running out of the store.

first. Many tourists visit Liverpool. Liverpool is the home of The Beatles.

(Many tourists visit Liverpool. Liverpool is home to the Beatles.)

2. The town hasn’t got any parks. People can go and relax there.

(This town doesn’t have many parks. People can come here and relax)

3. My son took part in the Beyond 2030 forum. The forum invited people to share their vision of the future.

(My son joins the Beyon 2030 forum. This forum invites people to come share a vision of the future)

4. Baron Pierre de Coubertin was the founder of the modern Olympic Games. He was not in favor of women participating in the Games.

(Baron Pierre de Coubertin is the founder of the modern Olympic Games. He did not like women participating in the Olympics.)

5. There will be an open discussion. The discussion will look at the main challenges and opportunities in the coming decades.

(There is an open discussion. The discussion will look at key challenges and opportunities in the coming decades.)

6. The changing economic role of women started in 1948. It has greatly affected the role of men.

(The shift in the economic role of women began in 1948. It greatly influenced the role of men.)

1. Many tourists visit Liverpool, which is ire home of The Beatles.

2. The town hasn’t got any parks where people can go and relax.

3. My son took part in the Beyond 2030 font, which invited people to share their vision of the future.

4. Baron Pierre de Coubertin, who was the founder of re modern Olympic Games, was not in favor of women participating in the Games.

5. There will be an open discussion which will look at the main challenges and opportunities in the coming decades.

6. The changing economic role of women, which started in 1948, has greatly affected the role of men. 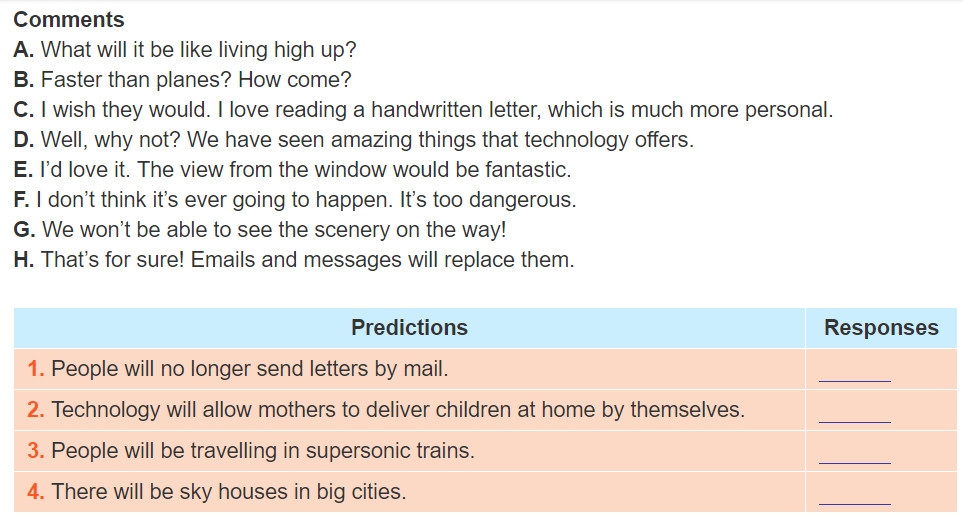 – I wish they would. I like reading handwritten letters, it’s more personal.

– Sure. Emails and messages will replace them

2. Technology will allow mothers to leave their children alone at home.

– Oh, why not? We’ve seen the amazing things technology has to offer.

– I don’t think that will happen. It’s too dangerous.

3. Humans will travel by supersonic trains.

– Faster than an airplane?

We won’t be able to see this happen.

4. There will be floating houses in big cities.

-Living in a suspended state, I don’t know what will happen

– I like so much. Looking out the window would be more interesting.

2. We called the delivery company. Russia often uses it.

4. Chi called the lawyer. My mother knows him.

5. He brought a woman. I worked with her last year.

– The vocabulary in Unit 11