1. drought: a long period when there is no rain and there is not enough water for people, animals and plants.

2. landslide (mud): a large amount of mud that flows down a mountain, often destroying buildings and harming or killing people below.

3. flood: a large amount of water covering an area that is usually dry.

4. Tsunami: a large wave that can destroy towns near the sea.

5. tornado: a large storm with strong winds that moves in circles

6. earthquake: a sudden and strong shaking of the earth’s surface.

1. The emergency team evacuated the village when the river flooded the area.

2. The rescue team is still trying to put out the fire.

4. Many countries have provided food and other supplies to the people affected by the hurricane.

5. Debris from collapsed buildings was scattered across the sea. 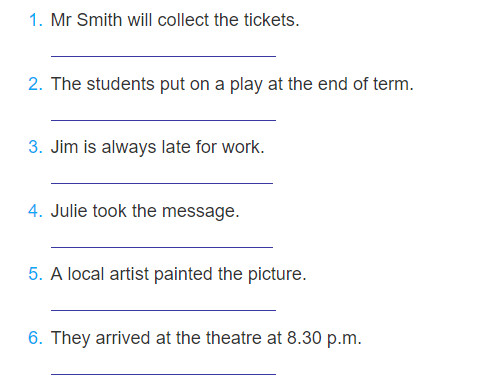 2. A play was put on by students at the end of term.

(A play produced by the students at the end of the term.)

4. The message was taken by Julie.(Message sent by Julie.)

Sentences 3 and 6 cannot be changed into passive sentences because the main verbs are is (verse 3) and arrive (verse 6). 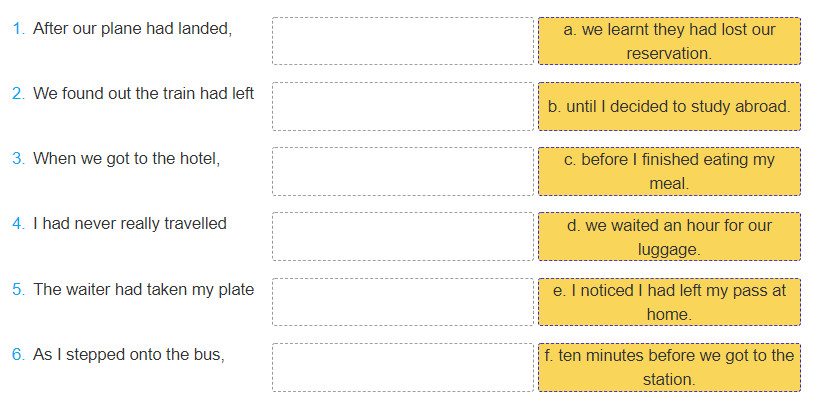 1-d. After our plane had landed, we waited an hour for our luggage.

(After our plane landed, we waited an hour for our luggage.)

2-f. We found out the train had left, ten minutes before we got to the station.

(We saw trains leaving 10 minutes before we reached the station.)

3-a. When we got to the hotel, we learned they had lost our reservation.

(When we arrived at the hotel, we knew they had lost our reservation.)

4-b. I had never really traveled, until I decided to study abroad.

(I had never really traveled, until I decided to study abroad.)

5-c. The waiter had taken my plate before I finished eating my meal.

(The waiter took my plate before I finished.)

6-e. As I stepped onto the bus, I noticed I had left my pass at home.

(When I got on the bus, I noticed that I had left my passport at home.)

– When I woke up yesterday morning, someone had stolen my bike.

(When I woke up yesterday morning, someone stole my bike.)

– When I got home yesterday, my sister had broken my computer

(When I got home yesterday, my brother broke my computer.)

– When my teacher came to class, she knew that I had gone to school late.

(When the teacher came to class, she knew I was late.)

– When my father came home, my mother shouted at me about my study.

(When my father came home, my mother scolded me for studying.)

A 6-year-old boy was saved by his foster dog from a forest fire.

Hundreds of homes were damaged or destroyed in Haiti by tornadoes.

The earthquake survivors were found under the debris after 10 days.

Temporary shelters have been set up for the volcano victims.

One million dollars was raised for the victims of the recent tropical storm in the Philippines.

The last pieces of debris were cleared up by the rescue team.

A: It is said that a 6-year-old girl was saved from a forest fire by her pet dog.

A: It is said that temporary accommodation was set up for volcano victims.

A: It is said that temporary accommodation was set up for the victims of the volcano.

Change the following sentences into the passive.

1. People grow rice in many countries in the world.

2. Graham Bell invented the phone many years ago.

3. They have used this car for many years.

5. They will take the garbage out of the city.

Put the verbs in the correct form

At the end of the lesson, students need to review and memorize: