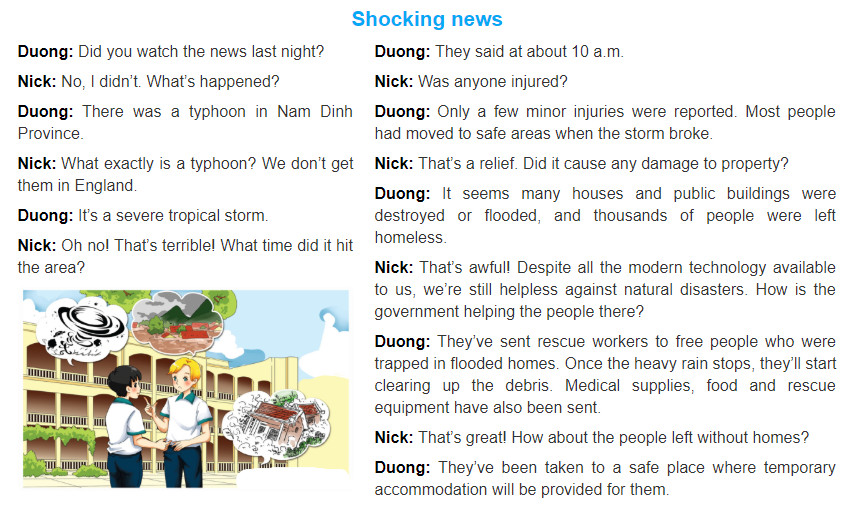 positive: Did you see the news last night?

Nick: I have not. What happened?

positive: There was a tropical storm in Nam Dinh province.

Nick: What exactly is a tropical storm? We don’t see them in England.

positive: It is a severe tropical storm.

Nick: Oh no! It’s terrible! What time did it make landfall in that area?

positive: They said it was around 10 am.

Nick: Has anyone been injured?

positive: Only a few minor injuries were reported. Most people moved to safe areas when the storm made landfall.

Nick: It’s a relief. Does it cause property damage?

Positive: It seems that many houses and public buildings were destroyed or flooded and thousands of people were left homeless.

Nick: So bad! Despite all the modern technology available around us, we are still powerless in the face of natural disasters. How is the government helping the people there?

Positive: They sent rescue teams to rescue people trapped in flooded houses. When the heavy rains stop, they will begin to clean up the debris. Medical equipment, food and rescue equipment are being sent.

Nick: Great! What about people without homes?

positive: They are taken to a safe place where they are provided with temporary accommodation.

1. Nam Dinh province was hit by a tropical storm.

2. Only a few people were injured.

5. The government has brought in rescue equipment, food and medical equipment.

6. Persons without a home will be provided with temporary accommodation.

b. Responding to news (Reply to the news.)

That’s relief! (What a relief!) 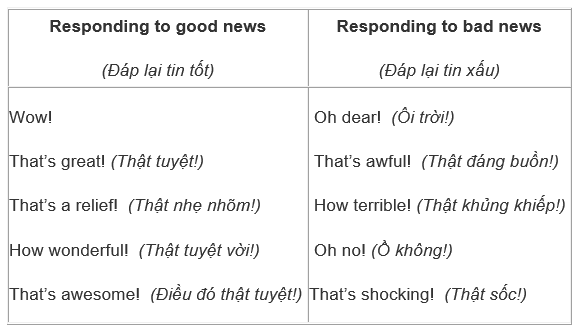 1. Mary and Tom will get married in July

2. I managed to pass the exam.

3. Many people died in the accident.

4. They invented a flying car.

5. Our house was destroyed by the storm. 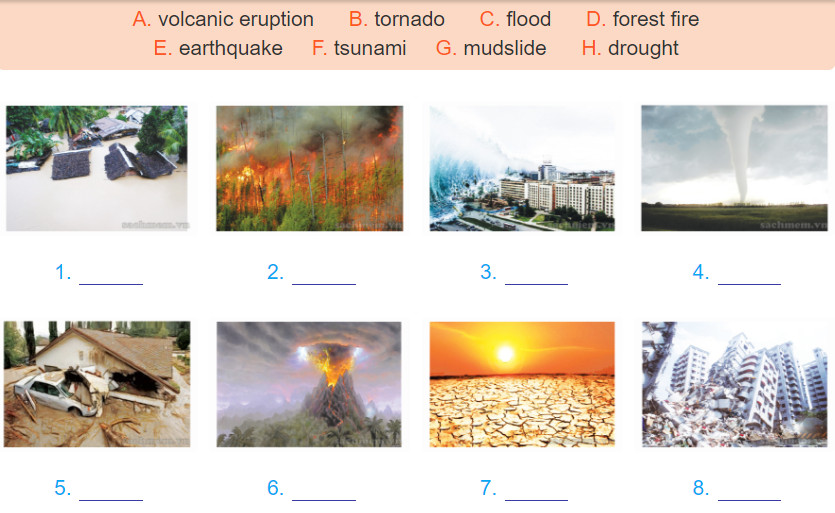 A: Which are the most common natural disasters in Tsinghua?

B: Typhoons and floods.

B: Typhoons happen there about three or fourth times a year, and floods about twice a year.

A: What is the most common natural disaster in Thanh Hoa?

B: Tropical storms and floods.

A: How often do they happen?

A: Which are the most common natural disasters in South of Vietnam?

B: Droughts are pretty popular.

B: Droughts happens about one or two times a year in the summer.

A: What damages do they bring?

B: They cause crops to die and the farmers cannot harvest so they might end up with unemployment and hunger.

A: What are the most common natural disasters in South Vietnam?

B: Drought is quite common.

B: Drought happens about once or twice a year in summer.

A: What damage do they bring?

B: They cause crops to die and farmers cannot harvest so they can become unemployed and starving.

A. worse B. worst C. worse than D. the worst

A. evacuate B. evacuating C. evacuated D. to evacuate

Question 9: Many buildings __________ in the earthquake and many people have been trapped there.

At the end of the lesson, students need to reread the lesson and memorize the following words: