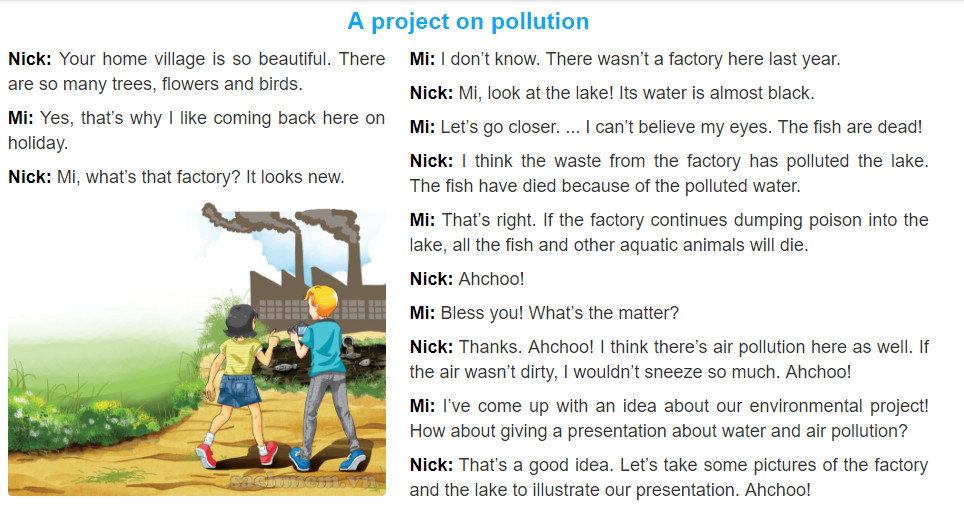 Nick: Your village is so beautiful. There are many trees, flowers and animals.

Mi: That’s right, that’s why I love coming back here every vacation.

Nick: Mi, what is that factory? It looks new.

Mi: I do not know. Last year there were no factories here.

Nick: Mi, look at the lake! Its water is almost black!

Nick: I think the waste from the factory pollutes the lake. Fish die because of polluted water.

Mi: That’s right, if the plant continues to pollute the water. All fish and other aquatic animals will die.

Nick: Thanks. Ahchoo! I think there is air pollution too. If the air wasn’t polluted, I wouldn’t sneeze so much. Ahchoo!

Mi: I have an opinion about an environmental project! Let’s give a presentation on water and air pollution!

Nick: Good idea. Let’s take some pictures of the factory and the lake to illustrate our presentation. Ahchoo!

2. grew up or lived in or near water

3. throw something you don’t want, especially where it’s not allowed

4. an object that can make people or animals sick or kill them if they eat or drink it

5. make it unclean or unsafe to use

=> They are in Mi’s home village. (They are from Mi’s village)

1. The water in the lake is contaminated by a ship.

2. Water pollution in the lake has caused fish death.

4. Nick won’t sneeze much if the air is clean.

5. Nick and Mi will have a talk about water and air pollution.

There are different types of pollution. Write each type under a picture.

(There are different types of pollution. Write each type under a picture.)

3. When radioactivity enters the soil, air or water, it is called radioactive contamination.

4. Excessive use of electronic lighting in the city can cause light pollution.

5. Water pollution is the contamination of lakes, rivers, oceans or groundwater usually by human activities.

7. Noise pollution occurs because there are too many loud sounds in the environment.

Work in groups. Which types of pollution in 3 does your neighborhood face? Rank them in order of seriousness. Give reasons for your group’s order.

Vote for the group with the best reasons.

(Work in groups. What type of pollution in section 3 does your neighborhood face? Rank severity. Give reasons for grouping.)

Air pollution does harm to your health.

Noise pollution can make you stressed.

Air pollution is harmful to health.

Noise pollution can stress you out.

Question 7: What would you do if a factory in your neighborhood __________ raw water into the river?

At the end of the lesson, students should memorize the following words: