first. What are the names of the two planets in pictures A and B?

(What are the names of the two planets in the picture?)

2. How do you think the pictures are different?

(How different do you think the images are?)

1. Mars is called the red planet because of its red-covered surface. There have been many discoveries of Mars by humans since the mid-20th century. Scientists hope that we can find another planet to house human life.

2. There are many main reasons why the weather on Mars is not suitable for human life. Temperatures on Mars can drop as low as -87 degrees Celsius and rarely above 0 degrees Celsius. But the bigger problem is the lack of oxygen. 95% of the air is CO2 and this is toxic to breathe. Furthermore, there is no water on Mars even though scientists have found traces of it.

3. However, in the early 19th century, scientists discovered that Mars has some similarities with Earth. A day on Mars is 24 hours, 39 minutes and 35 seconds, roughly the same as a day on Earth. Mars also experiences seasons like Earth. However, these seasons are twice as long because a year on Mars lasts twice as long as a year on Earth. 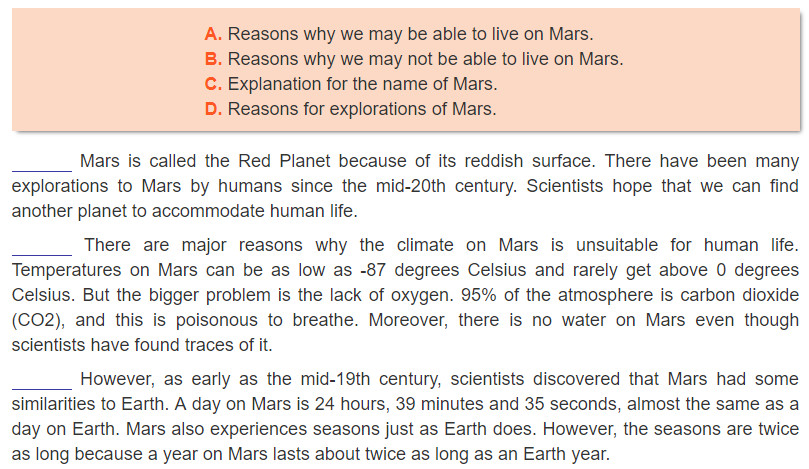 2.B. Reasons why we may not be able to live on Mars.

(The reasons why we might not be able to live on Mars.)

3.A. Reasons why we may be able to live on Mars.

2. What are the lowest and the highest temperatures on Mars?

(Highest and lowest temperatures on Mars?)

(Which is longer, a day on earth or a day on Mars?)

2. The lowest temperature is -87 degrees Celsius and the highest may be a bit higher than zero.

A: We eat tablets, rocks… What do you drink?

(We eat tablets, ice cubes… What do you drink? )

A: We drink liquid from under the rock… How long do you sleep?

(We drink liquid from the ground… How long do you sleep? )

A: We travel by flying cars, space buggies, UFOs…

A: The environment has forests, lakes, oceans. Mountains, cities… And you?

(The environment has forests, lakes, oceans, mountains, cities… How about you? )

B: We have dry dessert, rocky landspace, caves…What problem do you have ?

(We have arid deserts, mountain views, caves… What’s your problem? )

A: We have diseases, pollution, overpopulation… And you?

(We have disease, pollution, overpopulation… How about you? )

B: We have survival, loneliness….

(We have survival, loneliness…)

Long ago, people thought the Moon was a god and we would never be able to reach it. However, the invention of telescopes in 1608 enabled people to learn that the Moon is just another planetary body. And mankind’s dream of walking on the Moon suddenly seemed possible.

The dream came true on July 20th, 1969 when Neil Armstrong, Buzz Aldrin, and Michael Collins flew to the Moon as part of the Apollo 11 lunar mission. Neil Armstrong was the first to step onto the Moon. After admiring the tranquil, desolate beauty of the Moon’s surface, Neil Armstrong and Buzz Aldrin completed their mission, while Collins stayed in orbit to maintain the systems on board the spacecraft.

During the stay of more than twenty-one hours on the Moon’s surface, the astronauts found no rain or wind at all. The Moon was like a desert with plains, mountains, and valleys. The surface was covered with dust, which was so thick that they left footprints where they had walked. They left a United States of America flag there and return to Earth with forty-six pounds of moon rock for scientific study.

Question 1: People have known all about the Moon for thousands of years

Question 2: The invention of telescopes helped people to understand that the Moon is not a god.

Question 3: Only Neil Armstrong and Buzz Aldrin stepped onto the Moon.

Question 4: The climate on the Moon was unfriendly, with a lot of rain and wind

Question 5: The astronauts stayed on the Moon for nearly one day

Choose the letter A, B, C or D to answer these following questions

A new study published in the journal Science shows definitive evidence of organic matter on the surface of Mars. The data was collected by NASA’s nuclear-powered rover Curiosity. It confirmed earlier findings that Mars, the Red Planet once contained carbon-based compounds. These compounds – also called organic molecules – are essential ingredients for life as scientists understand it.

The organic molecules were found in Mars’s Gale Crater, a large area that may have been a watery lake over three billion years ago. The rover encountered traces of the molecule in rocks extracted from the area. The rocks also contain sulfur, which scientists speculated helped preserve the organics even when the rocks were exposed to the harsh radiation on the surface of the planet.

Scientists are quick to state that the presence of these organic molecules is not sufficient evidence for ancient life on Mars, as the molecules could have been formed by non-living processes. But it’s still one of the most surprising discoveries, which could lead to future revelations. Especially when one considers the other starting to find that Curiosity uncovered around five years ago.

Question 2: What may have been in Mars’s Gale Crater?

Question 3: What was the role of sulfur in the rocks?

A. It helped preserve the organics B. It formed the rocks

C. It made the atmosphere D. It made life possible

Question 4: Have there been enough evidence to confirm the existence of life on Mars?

Question 5: Why are the evidence in sufficient to claim life on Mars?

A. The molecules could have been formed by non-living processes.

B. The molecules exist everywhere on the planet.

C. All planets have these molecules.

D. The existence of these molecules is not strong enough

At the end of the lesson, the children need to reread the article about Mars and its similarities and differences with Earth, practice asking and answering about life on Mars and on Earth; Also memorize the following words: