You are here: Home / Class 8 English / Unit 11 grade 8: Science And Technology – Getting Started 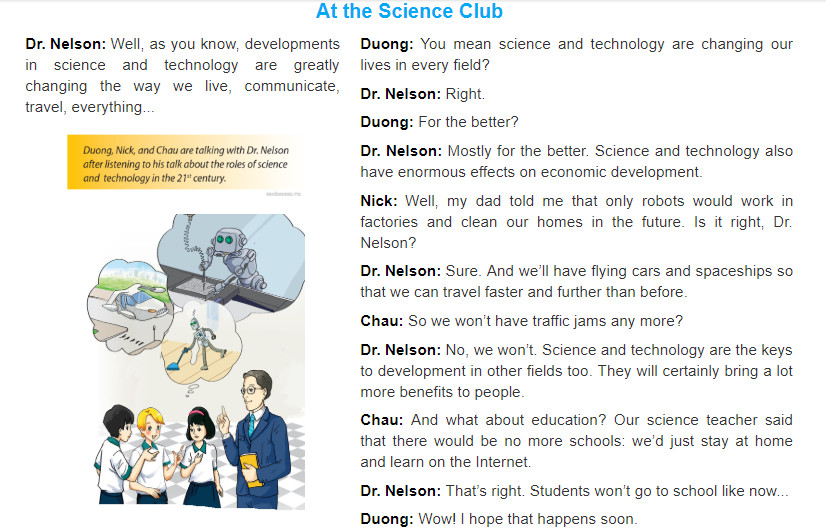 Duong, Nick and Chau are chatting with Professor Nelson after listening to his lecture on the role of science and technology in the 21st century.

Professor Nelson: Well, as you know, developments in science and technology are changing the way we live, communicate, travel, everything…

positive: You mean science and technology are changing our lives in all fields, right?

positive: For a better life right?

Nick: Well, my father said that only robots will work in our factory and clean our house in the future. Is that true, Professor Nelson?

Professor Nelson: Right. And we’ll have flying cars and spaceships so we can go faster and farther than before.

Chau: Then we won’t have traffic jams, right?

Professor Nelson: Are not. Science and technology are also key to developments in other areas. Surely they will bring many benefits to people.

Chau: And what about education? Our science teacher said there would be no more schools: we would just stay at home and study on the Internet.

Professor Nelson: Right. Students will not go to school like now…

3. What fields are science and technology greatly changing?

(What areas are science and technology changing?)

2. It is the roles of science and technology in the 21st century.

(That is the role of science and technology in the 21st century.)

3. Science and technology are greatly changing everything.

(Science and technology are changing things a lot.)

4. He told Nick that only robots would work in factories and clean our homes in the future.

(He tells Nick that only robots will work in factories and clean our houses in the future.)

5. She said that there would be no more schools, they’d just stay at home and learn on the Internet.

(She said that there will be no more schools, they will just stay at home and study on the Internet.) 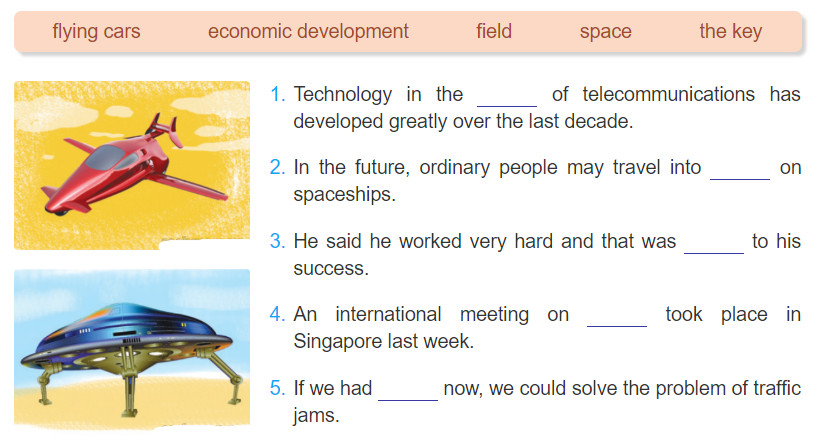 1. Technology in telecommunications has evolved over the decades.

2. In the future, ordinary people will travel to space by spaceship.

3. He said that he worked very hard and that was the key to his success.

5. If we have flying cars now, we can solve the traffic jam problem.

first. Her teacher said that she is really good at science subjects but she is not good at English.

2. Advances in technology have improved crop yields by more than 30%.

3. Cancer researchers have made great progress, but many aspects of the disease need further study.

4. Scientists will try to invent machines to teach children at home.

5. Thanks to scientific progress, our world will be transformed.

first. This is a species of insect previously unknown to biologists.

(This is an insect that was previously unknown to biologists.

2. I don’t like science fiction novels much. I think they are unrealistic.

(I don’t like science fiction novels very much. I don’t think they’re realistic.)

3. It is almost impossible to keep up with the latest developments in computing.

(It is nearly impossible to keep up with the latest developments in computing.)

4. The teacher said that accurate measurement was unimportant in this experiment.

(The teacher said that the exact method was not important in the experiment.)

5. Fortunately, the river flows through our town is unpolluted.

(Fortunately, the river that flows through our town is unpolluted.)

2. Do you want to travel into space in the future?

4. Do you know any Vietnamese Scientist? Who is she/he?

5. Will you go into sciences when finishing school? Why?

6. Do you admire any scientist or an inventor?

Question 6: “I will hand in my assignment to the teacher tomorrow.” Alan said to me.

A. Alan told me that he would hand in his assignment to the teacher the next day.

B. Alan told me that he will hand in his assignment to the teacher the next day.

C. Alan said me that he would hand in his assignment to the teacher the next day.

D. Alan told me that he would hand in his assignment to the teacher tomorrow.

Question 10: The teacher __________ me that I had better devote more time to doing scientific researches.

At the end of the lesson they need to reread the conversation between Duong, Nick, Chau and Professor Nelson; Also memorize the following words: