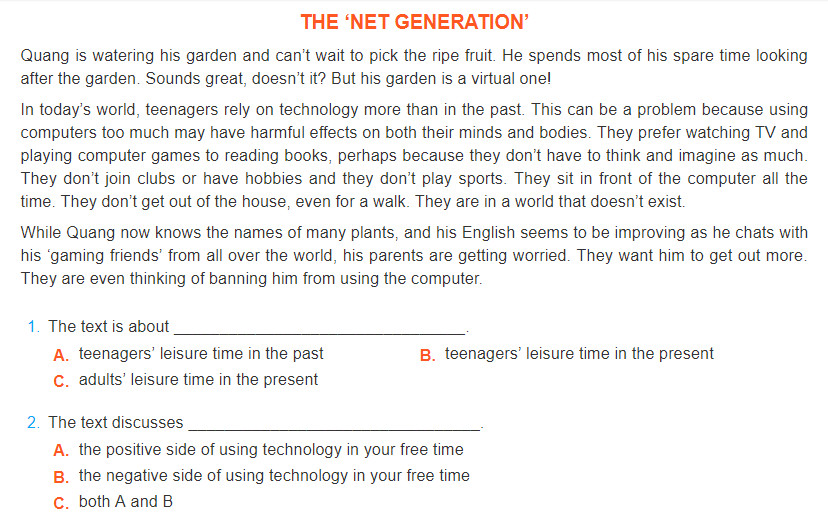 Quang is watering his garden and is looking forward to picking ripe fruit. He spends most of his time taking care of this garden. Sounds great doesn’t it? But his garden is a virtual garden!

In today’s world, young people are more dependent on technology than in the past. This can be a problem because too much computer use can have an adverse effect on the mind and body.

They prefer watching TV and playing computer games to reading books. Maybe because they don’t have to think and imagine too much. They don’t join clubs and have hobbies and dislikes in sports. They sit in front of the computer all the time. They don’t leave the house. Even walking. They are in. in a world that does not exist (virtual world).

While Quang now knows the names of many plants and his English seems to improve as he chats with playmates around the world, his parents are still worried. They want him out more. They even thought of banning him from using the computer.

A. Leisure time of teenagers in the past

A. The positive side of using technology in your free time

REMOVE. The negative side of using technology in your free time

OLD. Both A and B

Quang’s parents: We think that you should stop playing computer. It’s so harmful. You should get out and play sports.

Quang: I think computer trains my mind and memory. My English is much better because I surf the net.

Quang’s parents: You see your real friends less and less.

Quang: I have made a lot of friends from the game network.

teacher: I think that computer is also good for you, but you should not use it much. You should use it in limited time about 1-2 hours a day after you finish your homework. You should take up a new sport.

Quang’s parents: I think you should stop playing computer. It’s really harmful. You should get out of the house and play sports.

Quang: I think computers train my mind and memory. My English is better because I surf the net.

Quang’s parents: I have less and less real friends

Quang: I made a lot of friends from the game network.

Teacher: I think the computer is also good for you, but you shouldn’t use it much. You should use it for a limited time of about 1 to 2 hours in a day after you finish your homework. You should play a new sport.

Although computers can be used as a tool to spread awareness about problems in the environment, they cause (first) ___________ of environmental problems themselves. Pollution caused by the production of computer (2) ___________, as well as from the cleaning agents used to clean computers, is (3) ___________ great hazard to the environment and the people that live in it. People leave (4) ___________ computers on nonstop results in a lot of energy consumption and enormous amounts of paper are (5) ___________ used daily to print out electronically stored data. It causes health problems as well as (6) ___________ problems and is in urgent need of treatment. Use computer only when needed. If we all shut (7) ___________ our computers at night the energy savings could light the Eiffel Tower 24 hours a day for 720 years. The increase (8) ___________ of computers in the workplace has brought about the development of a number of health concerns. Many individuals who (9) ___________ at a computer report a high level of job-related complaints and symptoms, including ocular discomfort, muscular strain and stress. The (ten) ___________ of discomfort appears to increase with the amount of computer use.

instead from was crossword horizontal

Through this lesson, students will strengthen their reading comprehension and speaking skills (presenting their own opinions and views on a particular statement or problem; at the same time, refuting and listening to the opinions of others. others). Some of the main things you should keep in mind are as follows:

Some useful phrases in the Speaking section: