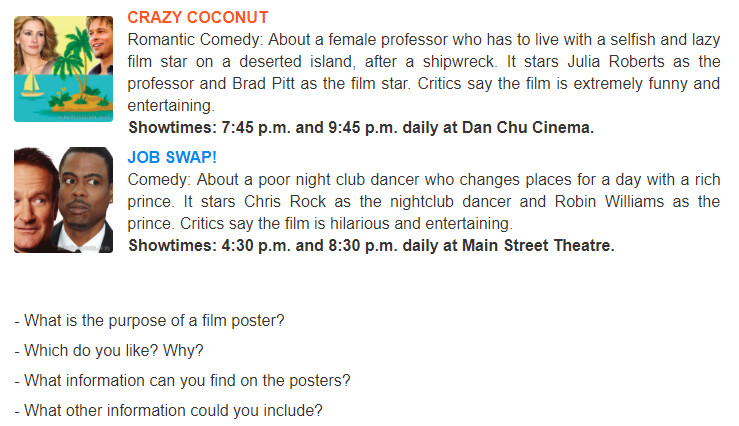 – It shows the view and characters of the film.

– I like the poster of “Crazy Coconut”. It’s beautiful and lovely.

– I can see the name of directors, characters, production company, the show time or sometimes the plot of the film.

Romantic Comedy: About a female professor who has to live with a selfish and lazy male star on a deserted island, after being shipwrecked.

The film stars Julia Roberts as a professor and Brad Pitt as a movie star.

Critics say the film is fun and entertaining.

Comedy: About a poor nightclub dancer who swaps places with a rich prince for one day.

The film stars Chris Rock as a nightclub dancer and Robin Williams as a prince.

– What is the purpose of movie posters?

Show scenes and characters of the movie

I love the poster of “Crazy Coconut”. It’s beautiful and cute.

– What information can you find on the poster?

I can see the producer’s name, the character, the production company, the showtime or sometimes the plot of the movie.

– What other information do you have?

At the end of the lesson, the children need to look at the movie posters and answer the questions, then design a poster for their favorite movie and organize it into an exhibition of the posters in class. .