What film shall we see? (What movie are we going to watch?) 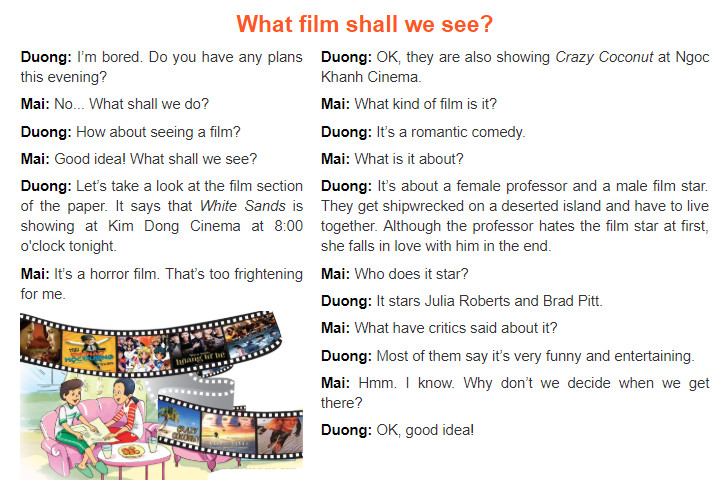 Duong: I’m so bored. Do you have any plans tonight?

Duong: Shall we go to the movies?

Mai: Good idea! What will we see?

Duong: Let’s see the movie section of the newspaper. The movie White Sands is showing at Kim Dong cinema at 8 pm tonight.

Mai: This is a horror movie. I’m so scared.

Mai: What is the genre of the movie?

Mai: What is the movie about?

Duong: It’s about a famous female professor and a male movie star. They were shipwrecked on a deserted island and had to live together. Although the female professor hates movie stars at first, she eventually falls in love with him.

Mai: Who plays the role?

Duong: The film is starring Julia Roberts and Brad Pitt.

Mai: What do the critics say about it?

Duong: Most of them say it’s very funny and entertaining.

Mai: Yes, I know. Why don’t we decide when we get there? 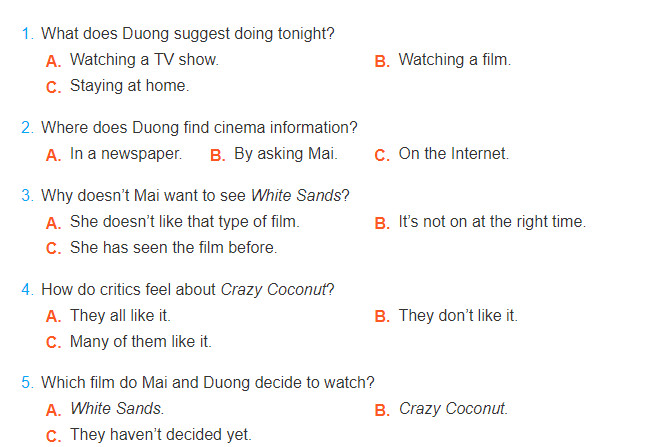 1. What does Duong suggest to do tonight?

B. Watch a movie

2. Where does Duong find information about cinemas?

A. In a newspaper

B. By asking Mai.

C. On the Internet.

B. It was noon at the right time.

C. She had seen the movie before.

4. How do the critics feel about Crazy Coconut?

A. They all love it.

5. What movie did Mai and Duong decide to watch?

C. They haven’t decided yet. 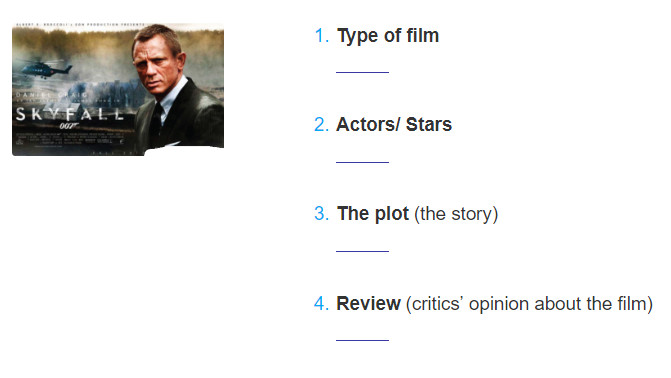 first. What kind of film is it? (What is the genre of the movie?) 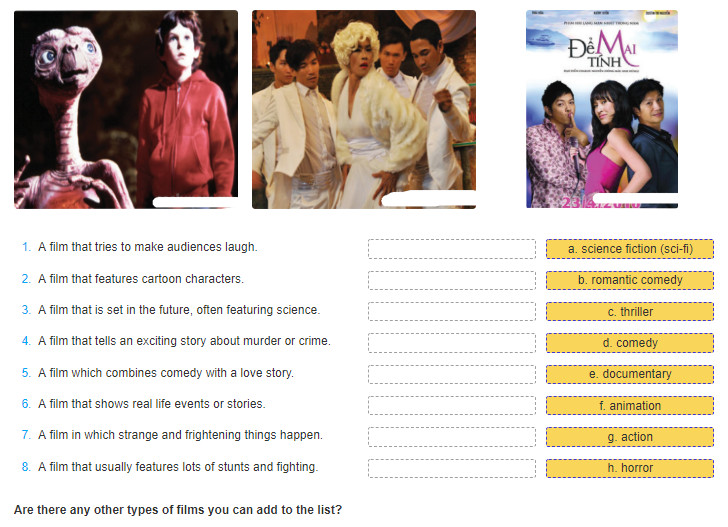 Other types of films:

Historic film: about events and story is the past.

1. A movie that tries to make the audience laugh.

2. A movie with cartoon characters.

3. A movie that takes place in the future, usually about science.

4. A movie that tells an interesting story about a murderer or criminal.

5. A movie that combines humor with a love story.

7. A movie in which scary and strange things happen.

8. A movie often has a lot of stunts and fights.

Historical films: talk about past events and stories.

– The plot: It is about a hero called “iron man” with super power. He did a lot of things to save the world out of bad guys.

– Plot: The film is about a hero called ironman. He has done many things to save the world from evil people.

– Rating: Many critics liked this movie.

A: What kind of film is it?

B: It’s an action film

A: Who does it star?

B: It star Daniel Craig

A: What is it about?

A: Is it skyfall?

A : What is the genre of the movie?

B: It’s an action movie.

A: Who plays the role?

B: The movie stars Daniel Craig.

A: What is the movie about?

A: Is it Skyfall?

Choose the correct option for each gap in the sentences.

A. Even B. But C. Although D. Despite

Question 2: I enjoyed the movie on TV yesterday evening …………. nobody in my family liked it.

A. in spite of B. despite C. although D. but

Question 4: I went to the cinema with my friends yesterday ………… feeling very tired.

Question 5: ………….. careful preparation, we have a lot of difficulties in making a new

A. With B. However C. Such D. Despite

Question 6: Let’s go to the Victor Cinema. I’m sure you’ll find the movie…………

Question 7: I have never felt as ………… as I did when I watched that horror film.

Question 8: We like the movie very much. The…………. are unforgettable and the plot is gripping.

Question 10: I was …… to learn that the director of that gripping film has won the first prize.

At the end of the lesson, students need to do full exercises, practice reading comprehension and memorizing the words in the lesson: