1. B. acted: because “ed” is pronounced /id/ while the rest of the words underlined ed are pronounced /đ/.

3. C. parade: because “ed” is pronounced /id/ while the rest of the words are pronounced /d/.

Complete the two word webs with two-syllable words according to the stress pattern. (Complete two words with stressed two-syllables.) 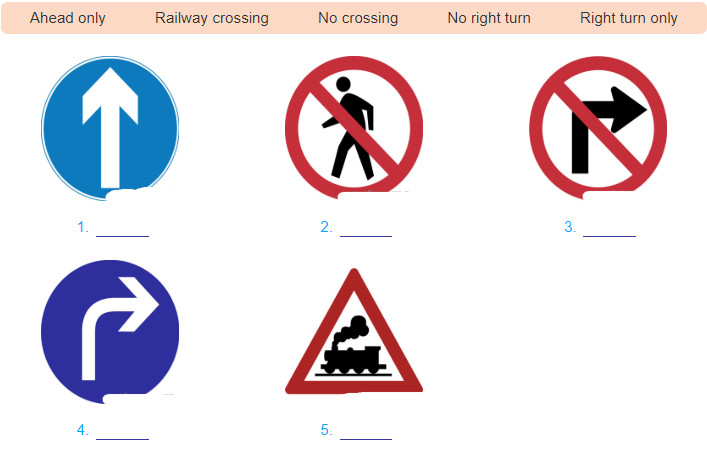 1. Ahead only (Go straight only)

4. Right turn only (Only turn right) 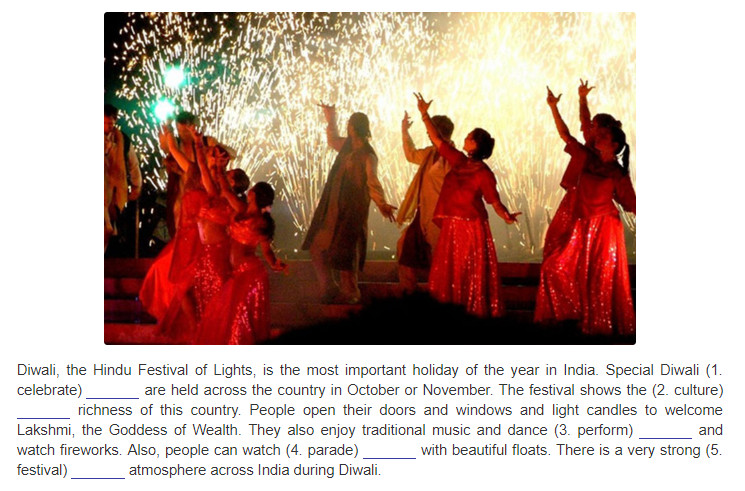 Diwali, the Hindu festival of lights, is an important holiday of the year in India. People hold special Diwali celebrations across the country in October or November. The festival showcases the country’s cultural wealth. People open doors and windows and light candles to celebrate Lakshmi, the god of wealth. They also enjoy music, traditional dance performances and fireworks. People also watch parades with beautiful floats. A very strong festive atmosphere pervades India during Diwali. 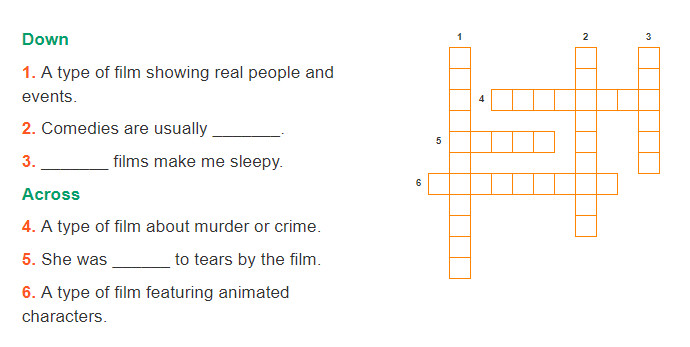 1. A kind of movie about real people and real things.

4. A movie about a murderer or a criminal.

5. She was moved to tears because of the movie.

2. What did you do at the festival last year?

=> I watched the parade and danced the samba.

3. Where do they hold the beer festival?

=> Oh, it is a popular festival in many countries including Vietnam.

4. When did you receive this souvenir?

=> When I went to La Tomatina – Tomato festival in Spain.

5. How did you take the photo?

=> I had to stand on the balcony to see the whole parade.

6. Between Diwali and Hanukkah, which do you prefer? 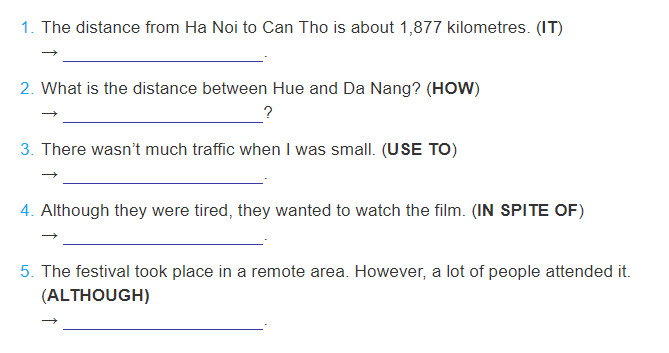 2. How far is it from Hue to Da Nang? (What is the distance between Hue and Da Nang?)

3. There didn’t use to be many traffic jams when I was young.

(There weren’t many traffic jams when I was a kid.)

4. In spite of being tired they wanted to watch the film.

(Even though they were tired, they still wanted to watch the movie.)

5. Although the festival took place in a remote area, a lot of people attended it.

(The festival takes place in a remote area, however, many people still participate.)

1. Mai, let’s go to the cinema this Saturday.

2. Great idea, Mi. Which cinema shall we go to?

3. How about the Cinemax? It’s the newest one in Ha Noi.

4. That’s fine. How far is it from your house to the Cinemax?

5. It’s only two kilometers. You can cycle to my house, and then we can walk there. Remember? Two years ago, there didn’t use to be any cinemas near our house.

6. Yeah. Things have changed. Oh, the most important thing before we forget … What will we see?

7. Haha. Look at this. I think this new animation is interesting. Read these comments: “hilarious, exciting, and worth seeing” …

8. OK. That’s a good idea, I’ll be at your house at 5 and we’ll walk there. Remember to buy the tickets before.

– Mai, let’s go to the cinema this Saturday.

– Good idea, Mi. Which theater are we going to?

– Cinemax, okay? It is the newest theater in Hanoi.

– That sounds good. How far is it from your house to Cinemax?

– Only 2km. You can cycle to my house, and then we can walk there. Remember? Two years ago there was never a movie theater near our house.

– Correct. Everything has change. Oh, the most important thing before we forget… what are we going to see?

– Haha. See this. I think this new cartoon is interesting. Read these comments: funny, exciting, worth watching…

– Okay. Good idea. I’ll be at your house and we’ll walk there. Remember to buy tickets in advance.

Make questions for the underlined words or phrases

1. Her neighbor gave her a nice dress.

4. My father was in Hanoi last month.

5. He traveled to Nha Trang by coach.

6. She went to the doctor because she was sick.

8. He taught English in the high school.

9. The homework was very difficult yesterday.

10. She often does the housework after doing exercises.

At the end of the lesson, students should have knowledge of:

+ It indicate distance (“It” indicates distance)

We can use “it” in the subject position to indicate distance.

+ Used to (Used to) used when talking about an action, a habit or a state that happened often in the past but no longer exists.

+ Adverbial phrases (adverb phrase) has the function to give more information about the time, place, way, … of an action. Adverb phrases are combined with nouns, prepositions or infinitives.

There are seven questions starting with “Wh” and one question starting with “H” in English: what (what), which (which), where (where), when (when), who (Who), whose (whose), why (why) and how (how)