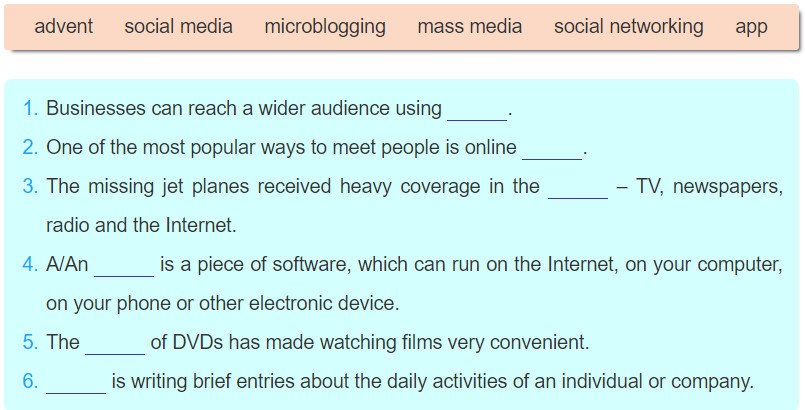 2. One of the most popular ways to meet people is online social networking.

3. The lost jets were covered in the mass media – television, newspapers, radio and the Internet.

4. An application is a piece of software, which can run on the Internet, on your computer, on your phone or other electronic devices.

5. The advent of DVD has made watching movies very convenient.

6. Microblogging is writing brief articles about the daily activities of an individual or company.

2. Last week we carried out a survey on social networking. (We did a social media survey last week.)

1. Sales of smartphones at this store increased to 300 at the beginning of 2014 and then dropped to the bottom at the end of the year.

2. When he arrived, I had the app installed.

3. I don’t want to download the app until I’ve read all the user reviews.

4. My friend joined the online language learning community when I became a member.

5. He hasn’t used any social media since he dropped out of school.

6. I installed the software when my computer froze.

Mark the letter A, B, C or D to indicate the word that from the other three in the position of the primary stress in each of the following questions.

Supply the correct form of verbs

At the end of the new Unit 4 English Grade 12 lesson – Looking Back, students need to remember:

– The pronunciation of ed in the ending of each word

+ Past perfect (past perfect) is used to describe an action that happened before another action and both of these actions happened in the past.

+ Past simple (Past Simple) is used to describe a definite action or thing in the past or has just ended.