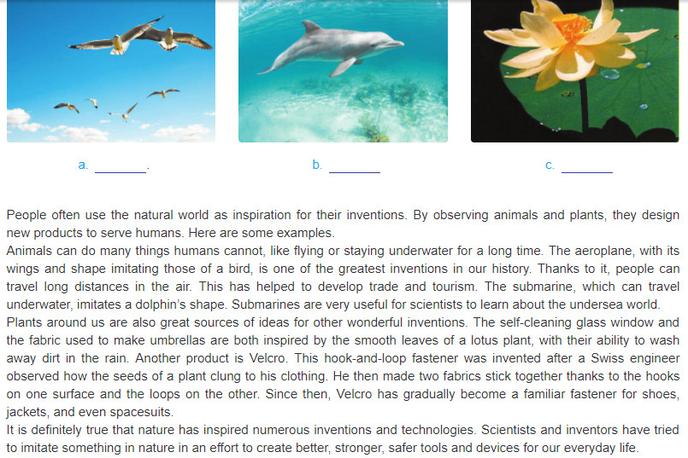 People often use the natural world as an inspiration for their inventions. By observing animals and plants, people design products to serve humanity. Here are a few examples.

Animals can do many things that humans cannot, like fly or live in water for long periods of time. The airplane, with its wings and bird-like shape, is one of the greatest inventions in our history. Thanks to it, people can travel long distances by air. This has helped develop trade and tourism. Submarines, which can run underwater, mimic the shape of dolphins. Submarines are very useful for scientists who study the ocean world.

The trees around us are also rich sources of ideas for other wonderful inventions. The self-cleaning glass window and the fabric used for the umbrella are both inspired by the soft lotus leaves, with the ability to clean dirt in the rain. Another product is the zipper. This type of padlock and ring was invented after a Swiss engineer observed how the seeds adhered to his clothes. Then he made two pieces of fabric stick together using hooks on the surface of one piece and loops on the surface of the other. Since then, zippers have become popular for shoes, coats, and even space travel.

To be sure, nature has inspired many inventions and technologies. Scientists and inventors have tried to simulate something in nature with the desire to create better, stronger and safer tools and devices for our daily lives.

What is the most suitable title of the text? (What is the best subheading for the paragraph?)

first. inspire: give someone a desire to do something well

(to inspire: to give someone something good))

2. fastener: device used to close a piece of clothing

(lock: equipment used to make a piece of clothing)

4. hook: thread or fibre with a curved end

5. loop: thin thread or fibre in the shape of a circle

(round: thin tool or in the form of a circle)

6. spacesuit: special clothing for an astronaut

(spacewalker: special clothing for an astronaut)

first. What are the inventions that imitate animals?

2. What are the inventions that imitate plants?

3. Why is the aeroplane considered one of the greatest inventions in our history?

(Why is the airplane considered one of the greatest inventions in our history?)

4. What can help scientists to learn about life under the sea?

(What can help scientists learn about marine life?)

5. How can a glass window clean itself?

(How does an automatic glass door clean?)

6. Find the words or phrases in the text that can describe an aeroplane, a submarine, and Velcro.

(Find a word or phrase in the description of a plane, a submarine, and a key.)

1. The inventions that imitate animals are the aeroplane and the submarine.

(Invented to simulate animals are airplanes and submarines)

2. The inventions that imitate plants are Velcro, the self-cleaning glass window and umbrella fabric.

3. Because it helps us to travel long distances in the air and encourages the development of tourism and trading.

(Because it helps us travel long distances in the air and encourages the development of tourism and commerce.)

4. A submarine can help scientists to learn about life under the sea.

(Submarines can help scientists learn about life under the sea.)

5. The material that makes up the glass window has the ability to wash away the dirt in the rain.

(The material that makes up the glass window has the ability to wash away dirt when it rains.)

6. An aeroplane: ‘its wings and shape imitating those of a bird’.

A submarine: ‘imitates a dolphin’s shape’.

The Velcro: ‘hook-and-loop fastener’; ‘two fabrics sticking together thanks to the hooks on one surface and the loops on the other’

(Airplane: Its wings and shape are modeled after birds.

Submarine: Modeled after the shape of a dolphin.

Matte buckle: zipper included hooks and loops; The two pieces of fabric are held together by hooks on one side and loops on the other.)

I think an aeroplane is the best imitation of nature because it exactly imitates not only the shape but also the ability of a bird.

(I think the plane is the most perfect simulation of nature because it not only accurately simulates the shape of the bird, but also simulates its capabilities.)

We are all around computers. Computers play an important play in our day to day lives, like we are very much dependent them for doing many things including giving users the ability to quickly and easily store and process data. Since the invention of computer they have evolved in terms of increased computing power and decreased size. Computers are used in many sectors like Education, Health and Medicine, Financial Institutions, Transport System, E-Commerce, Defense etc.

Computers connect us to the world of unknown. They help us gathering knowledge and huge information from the internet and storing it. Computers are multitasking and accurate enough to be used almost anywhere and everywhere including banks. Computer provide security from destructive forces and from unwanted action from unauthorized users like cyber attack or access attack.

Now computer is not just a calculating device, it has become much more than that. One of the main advantages of computer is its incredible speed, which helps human to complete their task in few seconds. All the operations can be performed very fast just because of its speed else wise it takes a long time to perform the task.

Question 2: Computers are not used in Defense.

Question 3: Banks use computers because they’re multitasking and accurate.

Question 5: Computers are not speedy enough to help human to complete their task in a few seconds.

Choose the letter A, B, C or D to complete the passage below

There is a lot of controversy surrounding the invention __________ (6) the telephone. There have been court cases, books, and articles generated about the subject. Of course, Alexander Graham Bell is the father of the telephone. After all it was his design that was first __________ (7), however, he was not the first inventor to come up __________ (8) the idea of ​​a telephone.

Antonio Meucci, an Italian immigrant, began developing the design of a talking telegraph or telephone __________ (9) 1849. In 1871, he filed a caveat (an announcement of an invention) for his design of a talking telegraph. Due to hardships, Meucci could not renew his caveat. His role in the invention of the telephone was ignored until the United States House of Representatives __________ (10) a Resolution on June 11, 2002, honoring Meucci’s contributions and work. You can read the resolution (107th Congress, H Res 269) on Congress.gov.

In this lesson, you will need to memorize the following words: