2. pop: a type of music popular with teenagers, with strong rhythms, harmony, and emphasis on romantic love

3. idol: one who is admired, often blind or excessive

4. contest: a competition, especially one in which contestants are judged by judges

6. clip: a short excerpt from a TV show or movie 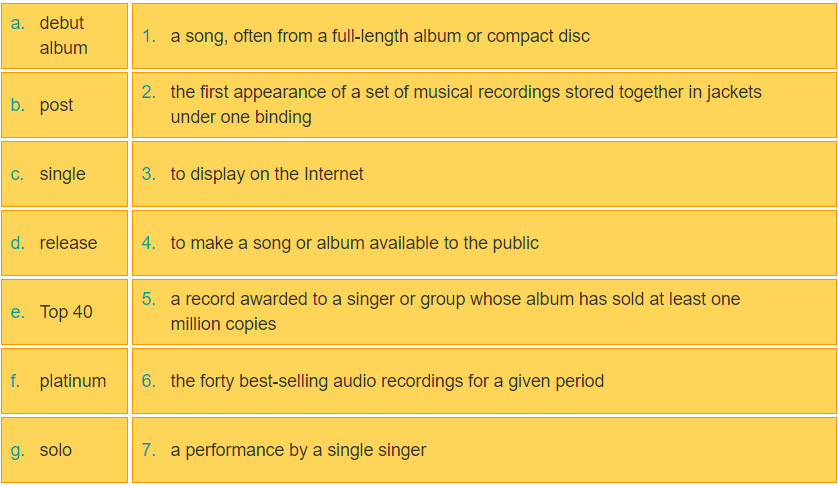 a. debut album – the first appearance of a set of recordings stored together in one disc

c. song – a song, usually from a full-length album or compact disc

d. release – make a song or album available to the public

f. platinum – a record given to a singer or group whose albums have sold at least 1 million copies.

Anna: Of course, I’m one of his biggest fans. I read his biography on the Internet and found out that he won second place in the Idol contest in his home country, Canada.

Roof: Every country’s got talent!

1. and – an equally important complement 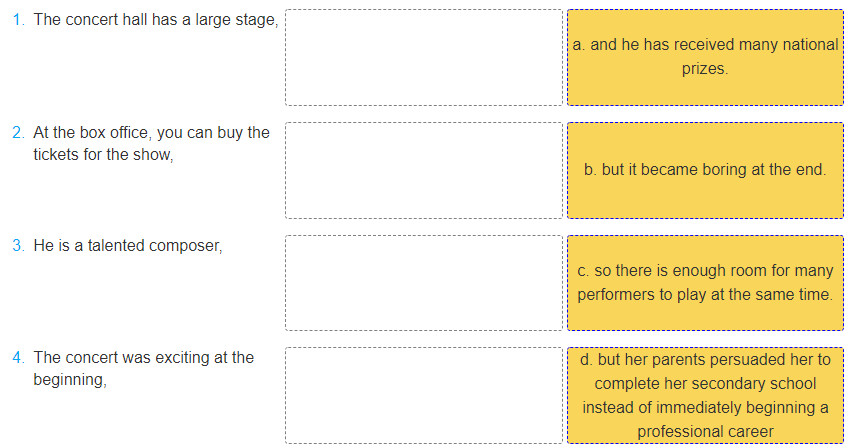 first. The concert hall has a large stage – so that there is enough room for many artists to perform at the same time.

3. He’s a talented musician – and he’s received many national awards.

4. The concert was fun from the start – but by the end it got boring.

6. She’s a talented pianist – but her parents convinced her to finish school instead of starting a career.

first. One day he promised to sing a song. He had such a beautiful voice!

(One day he promised to sing her a song. He has a beautiful voice!)

2. The teen singer is old enough to make up his own mind.

(This teen singer is old enough to have a mind of her own.)

3. Nobody can force the teen singer to do anything that her mother does not agree with.

– force sb to do sth: force someone to do something

(No one can force a teenage singer to do anything her mother doesn’t agree with.)

4. His performance was so boring that it made me fall asleep.

(His performance was so boring that I fell asleep.)

5. This morning many of his fans saw him ride with his girlfriend on an expensive motorcycle.

– see sb V: look at someone doing something

(This morning many of his fans saw him riding with his girlfriend on an expensive motorbike.)

6. I can’t decide whether to buy a ticket online or at the box office.

(I can’t decide whether to buy a ticket online or at the box office.)

Choose the letter A, B, C or D the word that has the underlined part different from others.

1. You may have an allergy. Be careful with what you eat and drink. (so)

5. I pass the test. My parents took me to the cinema. (therefore)

At the end of the lesson, students should keep the following key points in mind:

+ Compound sentence (Compound sentence) is composed of 2 or more independent clauses. These clauses are usually joined by conjunctions, which can be added with a comma or semicolon before the conjunction, or with linking adverbs.

+ Bare-infinitive (The infinitive without ‘to’) usually comes after the object and the verbs: make, let, help.

Ex: The boss made us work so hard. (The boss makes us work hard.)